Outlining for the Pantser, Plantser, and Panzer

Writerly types will often ask, "Are you a planner or a pantser?" Planners outline and plot out their stories before writing, with a clear end goal. Pantsers, on the other hand, fly by the seat of their pants (hence the name) and write without a plan. Some people consider themselves "plantsers", planning some things while also doing whatever they feel like. Full confession: I first heard "pantser" as "panzer", like the tank, and thought, "Heck yeah! I ride over the writing process and destroy everything in my path! I'm a panzer". I'm not sure that still isn't an accurate description.

Regardless, I am hardly a planner, no matter what else I am, but find myself in need of some sort of outlining scheme for two of the WIPs I'm starting: the alternate-history fantasy mystery (AHFM), and the novella-in-verse. There will be a lot of storylines and developments to wrangle, not to mention the huge cast of the novella, each member of which will get at least one poem per chapter. Winging these stories isn't an option, but I've tried planning using notebooks before, and this just ends up with pages and pages of good (and bad) ideas in no sort of order. I am, after all, a panzer, so I come up with scenes non-chronologically and will often scrap storylines at the drop of a hat. I needed some way to have the order of planning, with the freedom of pantsing, and my brain finally settled on a way to do that: three-ring binders!

The beauty of three-ring binders is, first, that they allow for change. Did you write out a plot line that totally changes? Just remove those pages. Want to add in a note about the magic system in your setting? Write it on a new sheet and pop it in where appropriate. I also like that you can buy tabs to separate sections. To me, outlining is more than just plotting. It involves world building, character backstories (which may never appear in print), and even blog preparation. So, without further ado, here are two separate examples of how I, a not-planner, have gone about outlining:

This is the story that, without a doubt, needs an outline, not only due to the complicated plot but also because of its three genres. Let me discuss each tab, and what I plan on including in each one. This is my process, which might look very different from other people's, so this is sort of an example of what one could do, rather than what one should do.

Characters: I've always based my character profiles off of the ones in manga, because I am a hopeless weeb. Anyway, these often involve likes, dislikes, blood-types (because Asia), and such, but can obviously be tweaked. While my Styx Trilogy profiles included spirit animal and spirit vegetable, this story will include "Flower" as a representation of the character's personality. I will also include a note about magical ability or lack thereof, as well as the backstory and current situation of each character.

Setting and Magic: These are the most relevant to its being an alternate-history and fantasy. These, or something like them, would also be useful for a sci-fi, horror, or paranormal story. The "Setting" tab will concern which events, historically, are different from our own and how that has effected the world. Politics and culture will be planned out, as will the layout of the city in which the story takes place. The "Magic" tab will involve how the magical system, spirits, psychic powers, and curses work.

Main Plot and Cases: While any outline will involve plot, I've separated out the main plot because my story involves lots of little subplots or cases to be solved. Thus, the "Main Plot" tab will involve the basic storyline and sequencing of events, also noting when certain cases take place along this line. The "Cases" tab is specific to the WIP's being a mystery. Each case is essentially one chapter, so I'll include a basic outline of said chapter as well as any dialogue I already have planned out. I will also enumerate the themes explored in each case and the details important to the mystery aspect of it: the crime and set-up, the evidence and clues, the perp and motive, and the denouement.

Side Stories, Blog Posts, and Miscellaneous: These tabs involve the non-writing aspects of the book. Side-stories are like those Iwrote for Styx, where we get to explore parts of the characters' lives that don't make it into the main book. Blog posts will involve a general list or schedule of posts I plan to do about the book once it's closer to publication. These include the initial announcement blurb, character profile and world building posts (taken from those tabs in the binder—how clever!), contents and cover reveal, sneak peaks, giveaways, and the actual release (I said I wasn't a planner when it comes to writing; I never claimed not to be an obsessive lunatic when it comes to blogging). Miscellaneous is just that: whatever doesn't fit anywhere else. This might include topics to research, notes on what I've found in said research, cover concept art, or (fingers crossed) ideas for chapter splash pages.

This will be a much, much simpler outline in terms of world-building (since it takes place in our world) and in terms of plot. What is more complicated is the characters, as there will be ten of them, they all get equal page-time, and they will each have a different poetic style (because I'm insane).

Characters: This tab will involve the history and current state of each character as well as their relationships with the other characters in the story. This is going to be a whodunit, so I might also include notes about why they each seem equally guilty. I'm not going to do actual character profiles as blog posts for these people—that would ruin the mystery quite a bit—but I will explore their personalities by noting what poetic style they each use and why. Some characters will only speak in sonnets, others in haiku and waka, others in free verse. Some of these styles will change throughout the course of the story—different sorts of sonnets, short tanka to long chouka, etc.—so I'll note down when and why that happens.

Plot and Chapter Tabs: The plot tab will be a basic plot outline of the whole story, and the chapter tabs will include what happens in that chapter and rough drafts of poems. True, this is getting into actual writing rather than outlining, but like I said, I'm a panzer, not a planner. I do what I want, and sometimes I want to write a poem as soon as it's in my head.

Blog Schedule and Miscellaneous: Similar to what I said for the AHFM, these concern non-writing things. I'm planning on actually publishing this novella on my blog as a serial, so that schedule will be included. Miscellaneous will likely include art for each post, and anything else that might come up.

Who is the Outline For?

One thing that you pantsers, plantsers, and panzers out there must realize is that any outlining or planning is for you and you alone. If you don't want to use tabs to separate your sections, don't. If you want to cover your binder with stickers that represent the story, or alternatively have nothing to do with the story, do. If you want to have more sections about the characters and fewer about the plot, or an entire tab devoted to maps or characters outfits, go nuts.

The point of an outline is to help you write your story, so anything that interferes with that should be scrapped, and anything that helps with that is fair game. I feel the need to say this because I have seen some very persnickety outlines. I've seen handwriting that's so uniform and neat that it looks like a computer font, or each chapter's happenings typed out on index cards. In most outlines I've seen, you never see any scribbles or scratching outs. I think that's why a lot of people don't want to wear the planner mantle, even when they do a ton of planning. But planning or plotting or outlining doesn't need to be immaculate. You don't need nice handwriting or complete sentences. You can scribble stuff out and add stuff above, under, and around what you've written. You don't even need to use character names, as initials or symbols will do the trick as long as it's clear to you what they mean. Just look at this mess, from one of my AHFM cases: 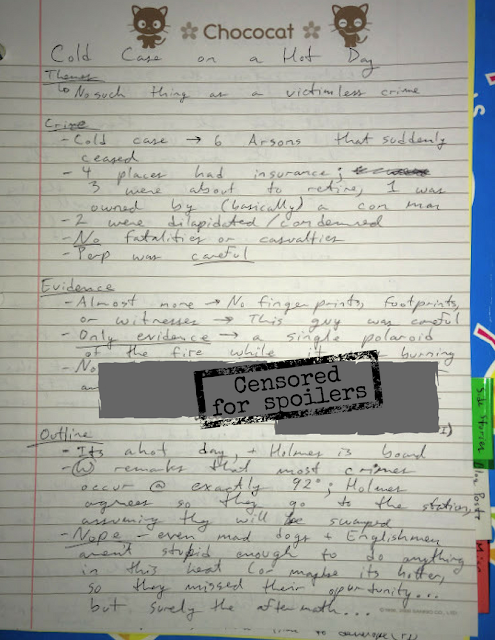 It sure doesn't look like a planner's outline, but it gets the job done. I have a record of what I want the chapter to be, how I want it to go down, and enough details that it all makes sense in the end. I think it's a pretty good outline, as far as I, a pantser/planster/panzer am concerned, and that's really all that matters.
Email ThisBlogThis!Share to TwitterShare to FacebookShare to Pinterest
Labels: alternate-history/fantasy/mystery WIP, musings, novella-in-verse WIP