As of last week, one third of 2019 has past! As far as New Year's Resolutions go, I'm doing... okay. My goal, if you recall, was that every week I would write something, outline something, research or edit something, and take or make one picture for social media. I also decided on doing two of any one of those four things, so that I would, in total, do five writing-related activities every week. Pretty quickly, however, I began missing goals. I didn't outline one week and bumped it to the next, or I only wrote half a blog post, or just... didn't write or outline anything! Technically speaking, I pretty much failed at my resolution by February at the earliest or mid-March at the latest.

But I didn't stop trying. I had been—have been—getting a ton of stuff done, far more than I regularly do. I didn't get the start I wanted on my novella (after reading my own posts about editing, I've decided to give myself a good long time to write and rewrite and rewrite again before putting it in front of people), but I've written an average of one blog a week, enough to give me a nice buffer should I need one. I'm almost finished with editing my Styx tie-in stories and Love & Chaos (all that's left is copyediting), and I've been doing good research for my AHFM. So, maybe I didn't fail?

I decided to do some calculations. Overall, my resolution should, by the end of the year, produce at least 52 of each type of activity: 52 blog posts, poems, or scenes; 52 social media pictures; 52 topics researched or items edited or formatted; and 52 chapters, scenes, or stories outlined. Additionally, with the one extra activity per week, I should have some combination of those four activities equal to 52 "bonus" items, for a total of 260 total writing-related goals achieved. Not too shabby for one year's work.

But how am I doing so far, at Week 18, of this year? I had been keeping track of my goals on a calendar, but that got messy fast, especially as I tried to reconcile what I had missed and what I had done to make up for it. I drew up a new, large chart of my activities, ignoring the weeks themselves and focusing on how many of each activity I did. It looks sort of like an upside-down bar graph: 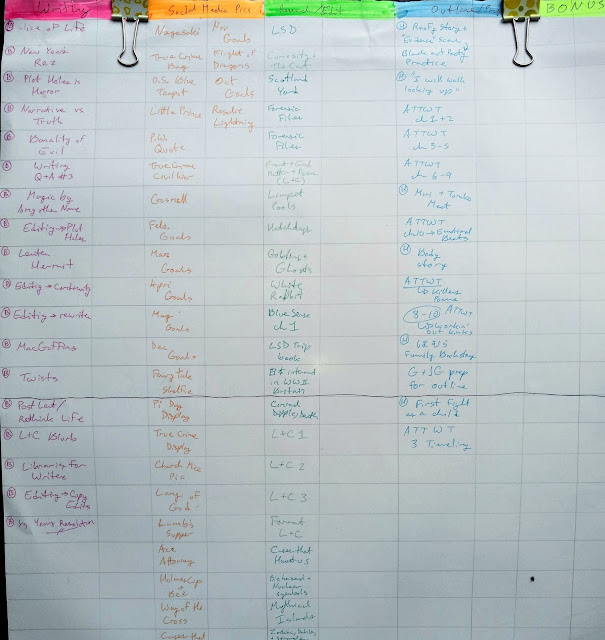 I should have at least 18 of each type of activity by now, plus 18 of any given activities over and above that, meaning 90 total activities completed. I'm pretty close, with 18 blog posts, 30 social media pictures, 13 topics researched and 10 items edited, and 15 scenes outlined. That's 86 activities. So close!

This chart also makes it easy to see where I'm doing well and where I need to catch up. Obviously, pictures are easy and fun to take, so I have a lot of them. Research and editing, similarly, are a breeze. But I'm not too far behind on writing and outlining, as long as I don't forsake them altogether. I'm not going to give up on my resolution, but I am going to change the parameters a bit.

Every week, I have resolved to do five writing-related activities, whatever they may be. That might mean one picture, one research topic, two scenes written, and one chapter outlined, or it might mean five chapters edited, or four topics researched and one photo taken. I think this freedom will let me be more creative, as I won't feel the need to limit myself to only one or two of each activity per week. 52 of each type is still the goal, but I'm interested to see how I get there.
Email ThisBlogThis!Share to TwitterShare to FacebookShare to Pinterest
Labels: Behind the scenes